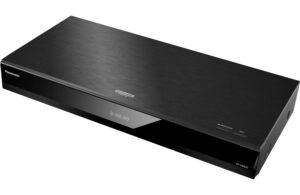 Bottom Line: The UB820 delivers reference quality video thanks in part to its HCX (Hollywood Cinema Experience) processor which incorporates Panasonic’s HD Optimizer taking HDR picture quality to a new level. Furthermore, there is no other Blu-ray player currently available that can match its video performance in its price class and it easily rivals and even beats the performance of Blu-ray players costing substantially more.

In today’s Blu-ray player market there aren’t many units that are considered high performance. Gone are the days when the likes of Sony, Denon and Oppo produced high-end units. When Oppo left the Blu-ray market back in 2018, it left a huge void in the high-performance category of Blu-ray players since they were arguably the most popular brand on the market and certainly delivered some of the best players ever made.

With Oppo no longer producing high-performance Blu-ray players, their absence left many enthusiasts without a source of affordable high-end Blu-ray players.

In 2018 Panasonic helped fill the void left by Oppo with the release of the DP-UB820 which is the focus of this review.

The overall design of the DP-UB820 is basic and simplistic and not unlike many other players on the market. The chassis is compact in size, not the full-size design I’m used to seeing from Oppo, and measures approx 16-15/16” x 2-1/2” x 8-1/16”. The build quality of the chassis is not robust and is made of plastic and metal and has more of an inexpensive look and feel which is expected at this price point.

The front of the unit contains a flip-down panel that reveals the disc tray when the open/close button is pressed on the player or remote. The rear panel has an assortment of connectivity options I will discuss later.

My setup: Sony XBR950H 4K LED TV. The tone mapping setting on the UB820 was set to “Middle or High Luminance” to match the peak brightness output of the display.

I’ve owned the DP-UB820 for several months now and have been very impressed with its overall picture quality. During my time with this Blu-ray player, the image quality has been nothing short of astonishing. The UB820’s HCX video processor is definitely the real deal when it comes down to delivering the best in 4K/HDR content. Color processing was pristine and vibrant, while detail and clarity were top-notch.

The UB820’s HDR Optimizer is an awesome feature that really improves picture quality on HDR Blu-ray discs. In a particular scene on the 4K HDR version of Black Hawk Down, a helicopter is taking off from the US military base, and as the helicopter passes in front of the sun the image quality remains composed by keeping the bright highlights from clipping and being washed out. With HDR Optimizer turned off during the same scene, the bright highlights from the sun suffered from clipping and left me unable to see the definition and detail of the sun and its illuminating rays.

Note: The HDR Optimizer does not function with Dolby Vision and HDR10+ 4K Blu-ray discs, only HDR10 discs. This is because those HDR formats use dynamic metadata which means the picture quality is constantly being adjusted on a frame by frame bias to provide optimal image quality which focuses on color and brightness information. That being said, HDR Optimizer is not necessary with DV or HDR10+ because of the dynamic metadata process.

HDR10 on the other hand uses static metadata which stays constant throughout an entire movie. This makes the HDR Optimizer extremely useful in maximizing the image quality of 4K Blu-ray discs.

Standard Blu-ray discs on the UB820 delivered stunning performance on top-notch Blu-ray transfers. For example, Prometheus looked absolutely amazing on the UB820. The 4K Direct Chroma Upscaling delivered picture quality that was nothing short of 4K quality. Detail, clarity, and sharpness were first-rate while contrast and black levels were dynamic with well saturated deep inky blacks. I was impressed.

In this section, I will not elaborate much on the sound quality of the UB820 for the reason that most individuals who purchase this player will not be using it as a dedicated player for high-end analog music listening for which this player is not capable of achieving due to its design which lacks beefed-up audio circuitry to produce audiophile sound. However, if you do want a Panasonic Blu-ray player that is capable of producing audiophile sound quality, you can move up to their flagship DP-UB9000.

With that said, the UB820 produces decent audio quality from its analog outputs as I discovered while evaluating two-channel content from my CD collection. Generally speaking, the sound was detailed and refined to a level of what I would expect from a player in its class if not slightly better. The sound was also open and spacious with good separation. Overall the analog audio quality from the UB820 was enjoyable and sonically satisfying for a player in its price class.

During my movie evaluation, audio output was sent via the HDMI outputs. With this configuration, the Dolby TrueHD soundtrack from Zack Snyder’s Justice League was simply awesome.

The Panasonic DP-UB820 Blu-ray player delivers reference quality video that easily rivals Oppo’s Blu-ray players of the recent past. Add to that the player’s unique HD Optimizer that maximizes picture quality, and you have a player that resides in a class all to itself. Very impressive indeed.

The reference quality video performance you get from the UB820 for such an affordable price makes it the best bang for your buck 4K Blu-ray player currently available on the market in my opinion and is definitely a keeper.