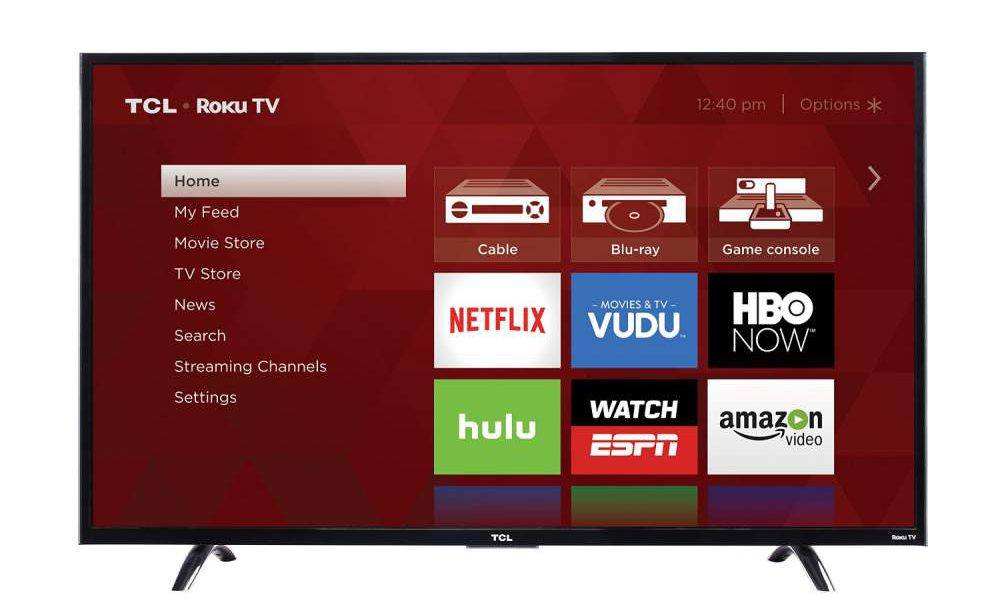 Want to simplify your smart TV viewing experience by integrating what is considered the best media streaming player/platform currently available into a 4K HDTV? Then TCL may have just what you’re looking for. Read on…

More and more consumers are looking for alternative and less expensive ways to watch and enjoy their favorite TV shows and movies, this circumstance is helping to create a huge market for media streaming devices and is becoming an excellent way for many TV viewers to cut the cable and satellite cord and make the switch to media streaming devices.

And to help make the switch much easier, Roku offers one of the best and most user-friendly media streaming devices currently available. TCL has partnered with Roku and has built its smart TV interface directly into their current line of 4K UHD TVs – no additional box required.

TCL  may not be well known by many people here in the U.S. – this is about to change, however, as the TCL brand becomes increasingly popular among consumers. And by the way, did you know that TCL is America’s fastest-growing TV brand?

The 55″ 55UP130 is the model I used for this review. However, I’d like to point out that this review applies to all of the models listed above since they all have identical specs, and according to the manufacturer should provide very similar picture quality.

The only difference is with the remotes – the UP130 models come with the “enhanced” remote control (more on this later), while the other models have a basic remote. There are some slight differences in styling as well.

When I first saw the UP130, I thought wow! This is a very nice looking TV.

The overall design and aesthetics make this set appear more expensive than it’s budget price suggests. The TV’s very slim glossy black bezel is accented by silver trim pieces located on either side of the display screen, in addition to the silver-colored curved feet which give the UP130  a very classy look that rivals much more expensive brands.

Viewing the TV from the side reveals a reasonably thin side profile (namely the top portion of the panel) which adds to its overall slender design.

The matte finish screen is illuminated with a direct-lit LED design which contains zones of LEDs located directly behind the TV’s screen.

Feature-wise, the UP130 contains most of the essentials that make it a very capable TV… starting with its excellent Roku smart TV platform. This smart platform gives you easy access to all of your favorite apps including Amazon Prime Video, VUDU, Google Play, Netflix, Hulu, and more than 3,000 channels delivering 300,000+ movies and TV episodes.

In addition, the 4K Spotlight Channel allows you to easily find and enjoy 4K content. This channel features an organized selection of 4K content from a variety of popular streaming channels and is updated with new content on a regular basis. 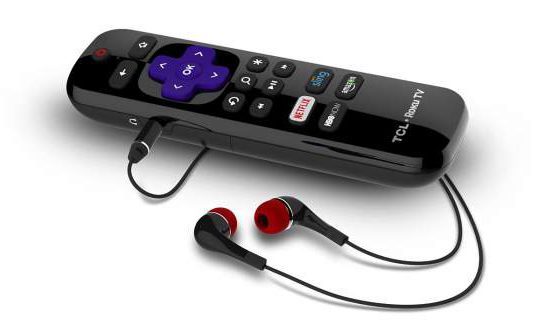 The supplied Enhanced Remote was a charm to use, and I enjoyed its simplistic functionality. Once I became accustomed to its minimal button layout, I found accessing whatever feature I needed quick and easy. This remote also has a headphone jack and is supplied with a pair of earbuds for private listening.

The remote also offers voice search to help you find programming using the sound of your voice. There is also a lost remote finder feature to locate the remote in the event you misplace it.

Dual-band 802.11ac  Wi-Fi is also onboard for connecting to your home’s network and allows for faster streaming performance. 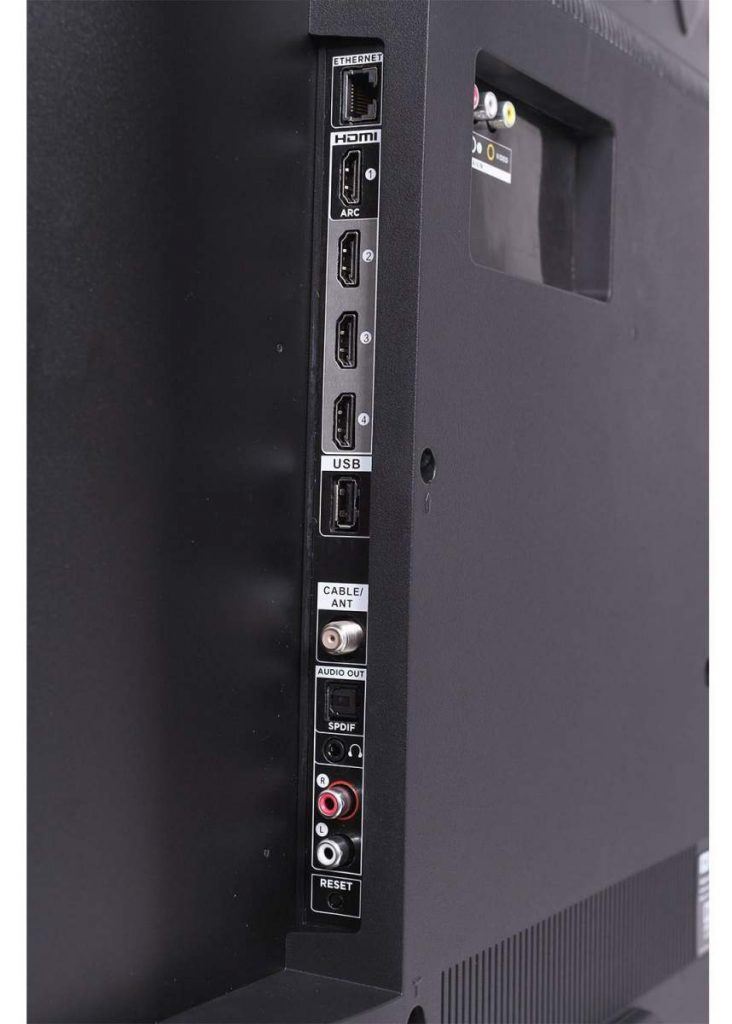 So how did the UP130 perform? Very good with most picture quality aspects, especially when considering its low price point. Hi-def images including for 4K footage appeared crisp and detailed, with a decent amount of image transparency. The images were also free of any image marring video artifacts, with the exception of some motion rendering issues I will speak of later.

Colors out of the box were a bit off, so a basic calibration using a calibration disc will improve the color palette. In general, color reproduction was strong and vibrant with most of the content I viewed. The colors also appeared accurate and tonally balanced with no particular color standing out from the others.

The UP130 uses direct-lit LED backlighting but without local dimming which would have greatly improved black levels and increased the contrast range on this display.

With that said, black levels weren’t great on this TV but were still satisfactory for an LED TV in this price range. The black levels didn’t appear to have any grayish overtones and were pretty solid when the TV was viewed in a well-lit room. However, when viewed in a darkened environment, black levels did appear slightly gray, this was especially noticeable when most of the screen image was black.

Shadow detail on this TV could be better. On many dark scenes, I had trouble seeing detail in objects that I would normally be able to see on most other TVs. The darkness in shadows appeared to be crushed and was much too dark visually.

Black screen uniformity was very good on this TV. I didn’t see any clouding or light bleed coming from the screen. Overall I was pretty impressed with its performance in this area.

Gray field (white) screen uniformity did not fare as well… I could detect some darkening and lightening areas primarily near the edges of the screen. However, I felt it wasn’t too distracting and only the pickiest of viewers may find this objectionable.

Side angle viewing on this TV was a bit below average when compared to what I normally experience on most LED TVs. At a 20 degree angle, the picture started to dim quite noticeably. After moving out to a 45-degree angle and wider, the picture image deteriorated a bit more in the form of color saturation and contrast loss. With that said, you will want to carefully consider your seating arrangements around this TV in your viewing area.

The UP130 does not contain a motion blur feature to help reduce blur while watching fast action content in movies and sporting events, nor does it contain any adjustments to control motion judder. What this essentially means is you will not have a way to reduce or eliminate any motion blur you may encounter while watching sporting events and movies.

Motion judder can be a problem when watching 24fps ( the frame rate of film-based movies) content on Blu-ray discs on a 60Hz TV. And since the UP130 is a 60 Hz TV and has no motion interpolation feature, this means you may experience motion judder which will show in the form of stuttering or jerky picture motion.

And yes, the UP130 does have some issues in both of the areas mentioned above… fast-moving objects did appear a bit blurry at times, and judder can be an issue with panning shots in movies.

One other thing worth mentioning in regards to the UP130 is its limited number of picture adjustments. It does have the basics, however, to achieve a decent looking picture image. But if you’re wanting to do a full calibration on this TV with its onboard settings, you’re out of luck, since it is lacking adjustments for white balance and color management. But hope is not lost – there just happens to be a workaround for this by using the TV’s Roku app which will let you make these adjustments.

Input lag while playing video games on this TV comes in at around 46.0 ms, which is not bad, but I have seen better results on many other TVs. Motion lag, however, is kept to a minimum on this TV and shouldn’t be a problem for most video gamers.

The TCL UP130 is a fine TV and will make a very good choice for anyone looking for an affordable 4K television.

Its biggest flaw, in my opinion, is a lack of motion control features that could have been useful to help reduce motion blur and judder. But this will not always be an issue with this TV and is dependent on the content you are watching.

On the positive side, you get a 4K Ultra HD TV that delivers very good picture quality for its asking price, in addition to a fantastic Roku smart TV platform that is very user-friendly and offers one of the best and most comprehensive interfaces in the industry.

To sum things up with a final question: Is the TCL UP130 worth buying? Definitely yes!

Cons:
• No motion control adjustments for blur and judder
• Some motion artifacts visible on certain content
• Side angle viewing color and contrast loss
• No HDR capability if you’re looking for this feature