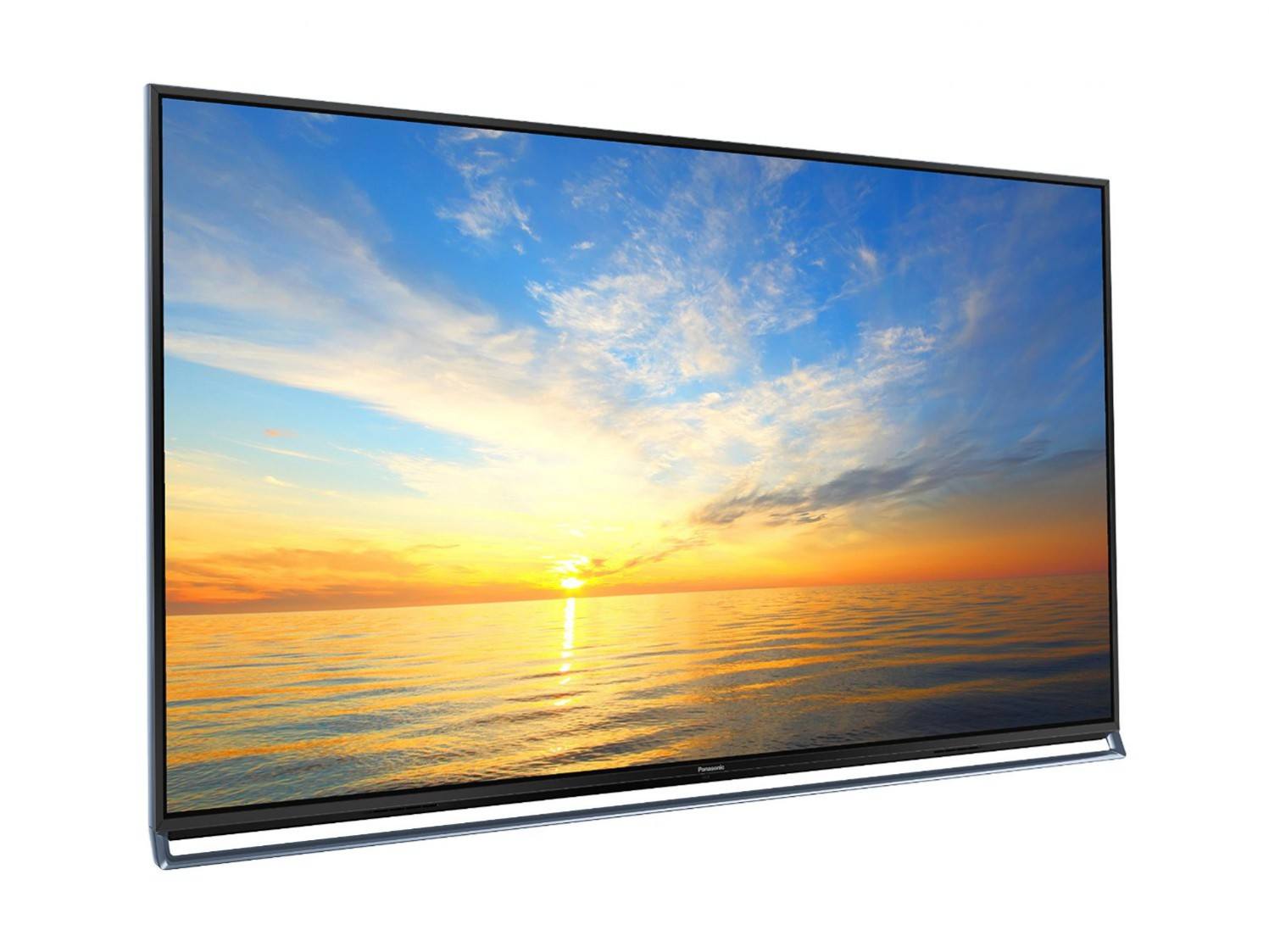 Ever since Panasonic stopped manufacturing plasma HDTV’s in early 2014, the company has been trying to fill this void with the “more” popular LED class of HDTVs. To this day their LED presence isn’t that strong in the television market. Case and point: The next time you pay a visit to your local electronics store, have a look around the TV department and see how many Panasonic models are available. You will probably see very few. However, if you take a look at Panasonic’s website you will see they have several LED TVs in their current lineup. And all of these, with the exception of one model, are 1080p displays. Currently, Panasonic only offers one 4K model: The TC-58AX800U, which is the focus of this review. This review also applies to the 65″ version: TC-65AX800U.

Note: Panasonic will be releasing two more premium 4K models very soon – these are the AX900 and AX850.

I’ll cut right to the chase and tell you Panasonic’s 58AX800 is an excellent 4K Ultra HD LED TV. It offers very good performance with a nice set of features.

The 58AX800U sports an attractive design featuring a glossy screen flanked with a thin black bezel, in addition to a chrome-colored support bar that runs the entire width of the TV’s screen. This support bar gives the set a more elegant look in my opinion. The panel depth isn’t all that thin measuring approximately 1.7″ deep. 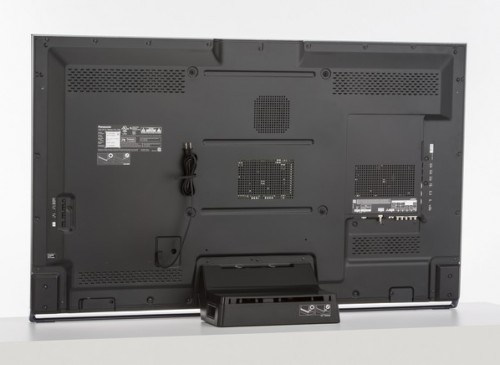 Rear panel – Note the pedestal base

The most unusual design feature on this TV is its pedestal stand which isn’t a typical stand design at all. It’s actually a 41-pound black support block that attaches to the back of the panel and keeps it from falling forward or backward. This non-typical design adds a lot of depth to the display; so keep this in mind when considering the type of TV cabinet you will be placing the display on, and be sure it will accommodate the sets pedestal block. Of course, this will not be an issue if you plan to wall-mount the display.

Some of the many features of the AX800 include THX 4K Certification. This ensures optimum color accuracy, precise upscaling, panel performance, and essentially guarantees excellent picture quality.

The display panel itself is an LED edge-lit design with Local Dimming Pro. This will allow the set to achieve higher contrast levels, deeper black levels and better shadow detail performance.

This display also achieves 98% of the DCI studio standards and ensures full reproduction of vivid colors from various types of image sources.

Another very useful feature of the AX800U that will rate high with avid video gamers is its DisplayPort input, which allows 4K gaming at 60fps with virtually no latency or input lag.

If you are into 3D viewing this TV supports this feature and is supplied with two pairs of active 3D glasses.

The AX800U is HDMI 2.0 compliant for increased bandwidth and 4K picture resolution capability at up to  60fps (frames per second). This set also contains an HEVC decoder for streaming 4K video content from services such as Netflix and Amazon Instant. 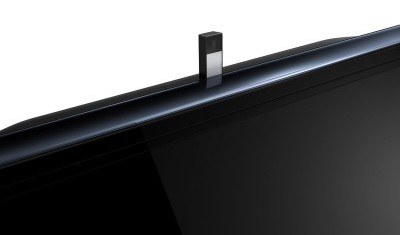 Panasonic’s Life + Screen is the TV’s smart platform interface. Here you will find many of your favorite apps including Netflix, Amazon, Vudu, Hulu Plus, YouTube, Pandora and many more. You can also use the Skype app with the display’s onboard pop-up camera to video chat with family and friends.

The TV’s smart screen interface allows users to set up their own custom “My Home Screen” as the main menu with their choice of apps and widgets.

The AX800U features wireless capability allowing you to connect to your home’s network and access all of your smart TV apps and services. There is also a web browser to surf the internet.

This display is supplied with two remotes: Your conventional wand-type with a standard button layout that provides easy operation of the TV’s interface. This remote is also backlit. The other remote is a small touchpad and provides point-and-click functionality to operate the TV and also features a voice recognition application with a built-in mic that allows you to control certain functions of the TV with the sound of your voice. And just as a side note, the regular remote provides the best method to operate the TV in my opinion.

If excellent performance is your top priority, then the 58AX800U will not disappoint. I was absolutely surprised by the beautiful picture images this television produced. Images were crystal clear and very three-dimensional with very fine detail and extremely accurate colors that were rendered with rich and vibrant tones.

The overall picture quality on the 58AX800U was in the same class as the excellent performing  XBR900B, with picture quality that was very similar in appearance, which made it difficult to distinguish any differences in their picture images. This is an outstanding accomplishment for the AX800U, being able to deliver this class of performance at a much lower price. Well done Panasonic.

Some of the demo footage I viewed on this display was of a soccer game, and the resulting image quality was absolutely amazing. The images were rendered with amazing clarity and intricate detail. Image depth was also excellent and allowed me to see deep into the image and discern the very fine detail in the faces and clothing among the crowd of spectators. This TV’s capability to render such fine detail also allowed me to easily make-out individual blades of grass on the soccer field in conjunction with a very vibrant green color palette.

Many of the shots in this video footage showed the excellent contrast capability on this display. For example, the soccer field was well lit from the stadium lights producing a bright foreground picture image with very good highlights, while within the same shot, background images of the spectators were dark but were still easily discernible and contrasted well with the brightly-lit foreground images.

Shadow detail in the dark areas of these shots was also good; however, I did experience better performance in this area on the XBR900B.

While watching the action taking place on the soccer field, I detected no motion blur artifacts as the athletes moved quickly about the playing field.

Another interesting and positive attribute regarding the AX800U’s picture performance was the sets ability to display images that appeared very smooth and almost “plasma-like” in nature. This was most apparent while viewing the on-screen text in the image. Many LED displays produce text with a harsh and edgy appearance as though it is being over-enhanced or processed. This was not the case on the AX800U; the text was rendered with very smooth gradations and in a natural-looking manner.

With all the positive aspects surrounding the AX800U’s performance, there were a couple of areas where the set’s performance was lacking: Side angle viewing was a bit below average for an LED display. As I moved off-center to either side of the TV, it began to dim quite noticeably. So I strongly suggest you keep “off-axis” viewing angles to a minimum on this display.

Audio performance was also strongly lacking with this TV. It did manage to produce clear and discernible sound; however, it was very thin, lean and anemic sounding with no real bass output, even though the TV does have a small woofer. Using a soundbar with this TV will give you much better audio performance.

After reviewing the TC-58AX800U, it has become apparent to me that Panasonic is headed in the right direction, proving its ability to manufacture LED 4K Ultra HD TVs with class-leading performance and features.

Panasonic’s AX800U is one of the best performing televisions on the market, and I must say I was very surprised at just how good it actually performed. Sure, it’s not perfect, and it does have a few flaws just as most HDTVs do. But I believe these shortcomings will not be a deal-breaker for many consumers, especially after experiencing its overall awesome picture quality. And when you factor in its current price versus performance value, this is one 4K UHD TV you will have a difficult time walking away from. Highly recommend.

Your questions and comments are always welcomed.