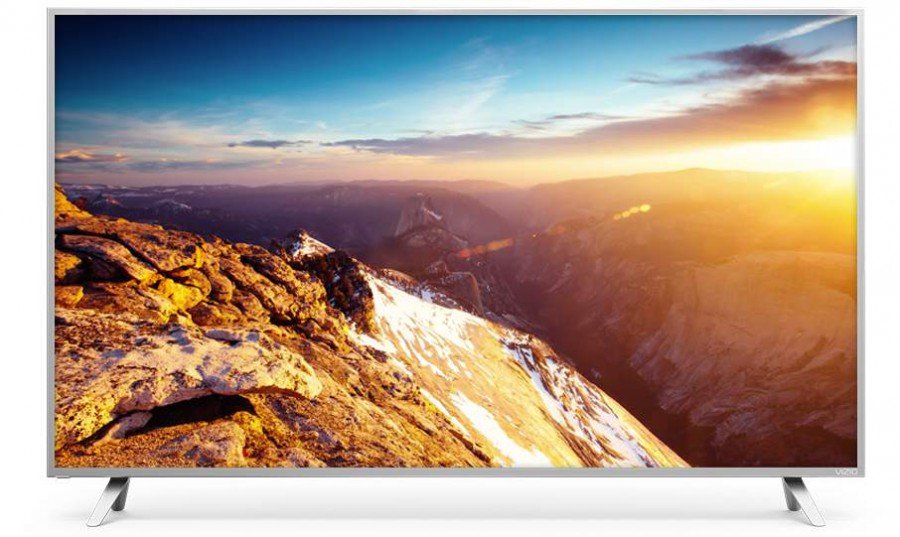 When Vizio’s first generation of P Series televisions hit the market in late 2014, they were met with mixed reviews from consumers, enthusiasts and industry experts alike. These TVs generated reports from users of picture quality and functionality issues (see the review of P652ui-B2 here for more info). However, Vizio did work to correct many of the issues via firmware updates.

This review applies to all models with the exception of the P55-C1 which uses an IPS display panel that affects picture quality by reducing contrast and black level performance when compared to the other models’ use of a VA display panel.

Design and Features – So What’s New?

When compared to the previous P Series models, the overall appearance of the new lineup is much nicer and features an anodized aluminum silver finish that gives it a higher-end look. In addition, the bezel and panel depth is slightly thinner than the 2014 models. However, the panel depth is still a bit bulky (2.36″) when compared to Samsung’s and Sony’s much slimmer designs.

One notable improvement on these latest models is the new stand design; gone is the outdated appearance and somewhat unstable pedestal design which has been replaced with a much more modern looking pair of “angle shaped” cast aluminum calibrated legs.

The LED zones for the display panel’s full-array backlighting has been substantially increased from 64 to 128 active LED zones on the 65″ and 75″ models. The 50″ and 55″ models contain 126 active LED zones. This should theoretically increase contrast and black level performance. The screen contains a semi-matt finish.

Note: Vizio’s P Series only has Dolby Vision HDR capability. HDR10 will be added this summer via a firmware update.

Update 8/10/2016: Vizio issued a software update allowing the P and M series TVs to be compatible with HDR10 sources like 4K Blu-ray players.

Another major change for 2016 is the new SmartCast Tablet Remote. This 6″ Android device delivers 1080p screen resolution, has 16GB of storage, stereo speakers and complete access to the Google Play store. 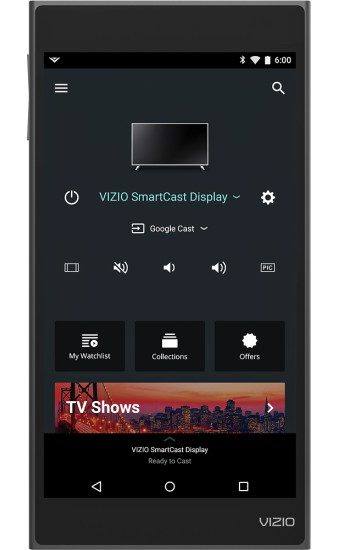 The TV’s smart platform is built into the tablet with all functions controlled through and cast to the TV from the SmartCast remote. The TV itself has no smart TV interface or on-screen menus with the exception of the most basic functions like volume/mute, input, play/pause, picture mode, channel, pairing and power which are controlled by the included basic IR remote. To adjust picture settings, you must use the tablet remote. For smart TV programming, you must also use the tablet to access apps such as Netflix, and then cast your selection to the TV.

Even though the tablet remote is a neat concept, it is not without its flaws; functionally it sometimes loses contact with the TV and is slow to respond to commands. With that said, I believe Vizio should be able to resolve these issues with a firmware update.

I must take issue will what I consider a major omission on the new P Series TVs – and that is the lack of a built-in TV tuner. Vizio refers to this as their “Tuner-Free-Displays”. The problem with this design – in my opinion – is not being able to connect a TV antenna to receive over-the-air broadcast TV such as your local TV stations.

I see this being a potential downside for anyone who doesn’t have or wants cable or satellite service (cord-cutters) and solely relies on an over-the-air broadcast for their TV entertainment. All is not a loss, however, for all the cord-cutter out there, you can still stream your favorite programming via the hundreds of apps available through the Google Play store from services such as Netflix, Vudu and Hulu to name a few. You also have the option of connecting streaming devices like a Roku box or Roku streaming stick. 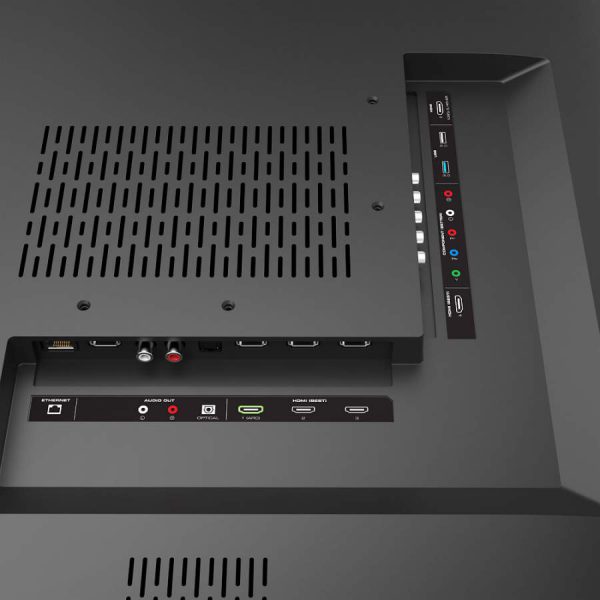 Note: HDMI 2.0a support will be added this summer via a firmware update.

I recently spent some hands-on time with the 65″ model, and my first impressions were generally positive.

Out of the box, the color presentation presented by the P65-C1 was very good. I recommend you use either the “Calibrated Dark” or Calibrated” picture modes to achieve the most accurate picture image.

Colors appeared nicely saturated with good tonal balance and accuracy. I also appreciated the natural look of the color palette.

Detail and clarity were also good delivering a sharp and refined picture image that revealed plenty of detail in the objects on-screen and landscape scenery.

All P Series models use full-array LED backlighting with local dimming; this design allows the P65-C1 to achieve excellent black level and contrast performance. Blacks were very inky in appearance in dark scenes. Shadow detail was also very good in scenes that were shot in a low-light type environment.

One slight downside to the P65-C1’s great black level performance comes while the local dimming feature is turned on and there is an area of the screen that has a small white object overlaid with a black background, this scenario makes the peak white output appear somewhat diminished. This effect can be reduced if the local dimming feature is turned off. I believe, however, most viewers will not find this issue to be a problem.

Screen uniformity is very good on this display, delivering a uniform solid black image across the entire screen. I did not detect any light bleed or clouding.

Side angle viewing did produce a fair amount of color saturation and contrast loss when viewing the screen at wide angles. However, its performance in this area was typical of what I’m used to seeing on most LED displays, and shouldn’t be a major issue with proper seating arrangements within your viewing area.

Motion blur didn’t appear to be a problem as I watched some fast action scenes from the movie Exodus: Gods and Kings in 4K resolution; the on-screen action was smooth and judder-free. However, I did notice in a few incidents some slight image jerkiness in some of the demo video clips I viewed; this may have been an issue with the video content itself and not the TV.

Upscaling of 480p, 720p and some 1080p sources to 4K could be better on this display and can appear a bit soft in addition to some picture detail loss. This will be noticed more on standard definition content such as 480p and 480i sources. I personally prefer the upscaling on Sony and Samsung TVs which is much sharper and more refined in appearance.

Although the number of TVs I have seen and evaluated High Dynamic Range content is currently small, what I am discovering is that image quality can vary depending on the content being observed, which can range from subtle to very noticeable. On the P65-C1 the HDR results were very good, with ample increases in contrast and image brightness highlights. Picture detail was also improved, in addition to more dynamic color reproduction.

The addition of a fully functional Android tablet remote makes for a whole new smart TV viewing experience. The tablet remote functionality can be a bit quirky at times, but I’m sure this can be remedied with a firmware update.

You may also like to know that I checked out the customer reviews at BestBuy.com and found the majority of owners are very satisfied with their P65-C1. Furthermore, you get a lot of bang for your buck with this television, and the price vs. performance factor makes Vizio’s P65-C1 a great value and one of the TVs to beat in 2016, in my opinion.

You may also like this article on Vizio’s 2016 P Series displays. 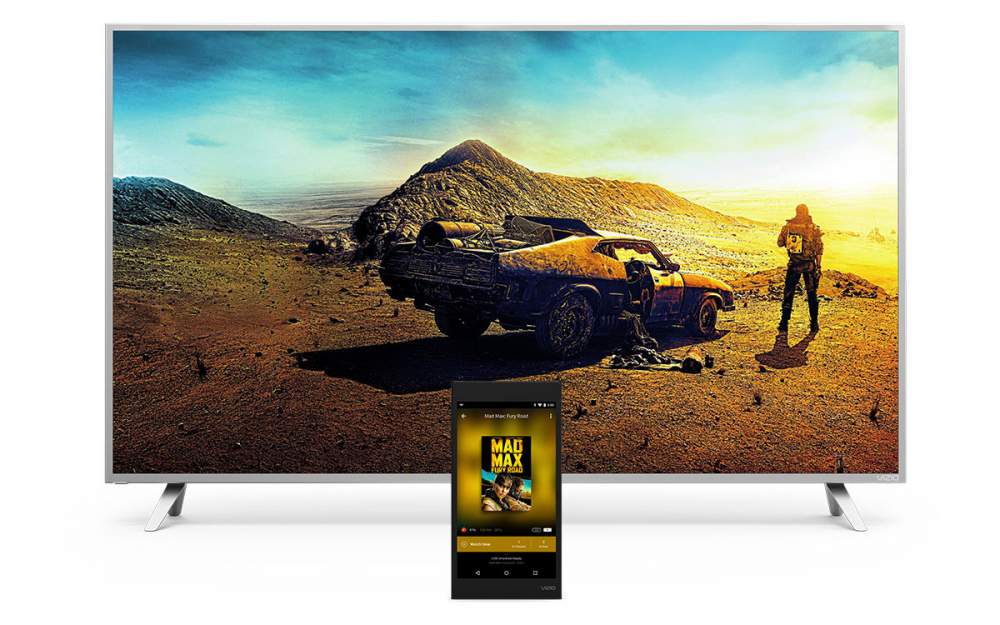 Cons:
• Side angle viewing reveals your typical LED contrast and color saturation loss
• No built-in tuner
• No on-screen menu access – must use a tablet for this function
• Smart tablet remote can lose contact with TV and can be slow to respond to commands
• 4K upscaling of lower resolution sources can appear a bit soft
• No smart TV app support for Amazon or iTunes