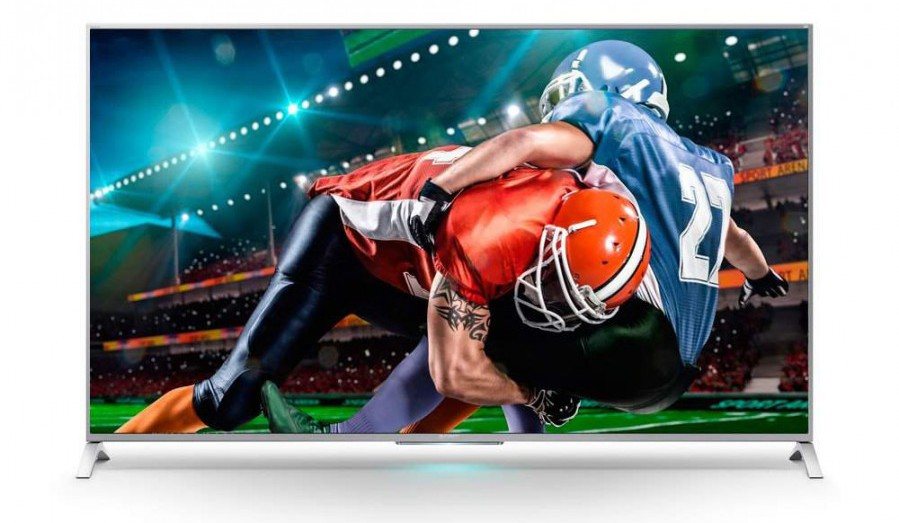 Sony’s XBR65X800B is part of the company’s premium XBR lineup. This new model was released in December 2014/January 2015; however, it technically isn’t part of their upcoming 2015 model releases which will hit the streets this spring. Nor is it officially part of last year’s 2014 model line.

But since it does have the “B” designation in its model number, I suppose you could call it a late 2014 addition, or you could consider it a bridge between this year’s and last year’s models. So whatever you choose to call it, it’s Sony’s latest 4K UHD TV to hit the market.

The XBR800B is available in 55 and 65-inch screen sizes. The display reviewed here measures 65 inches diagonally, however, this review also applies to the 55″ model since the only difference between the two is their screen size.

The XBR800B isn’t your typical black or charcoal colored front panel design. Instead, it is an eye-catching silver platinum finish that distinguishes it from most other displays in the HDTV landscape. Sony has also trimmed down the overall size of this set when compared to last year’s models. 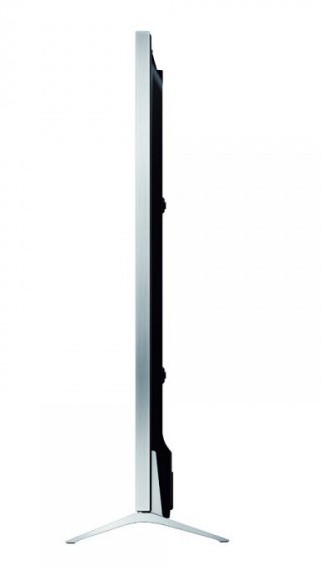 The bezel itself is very slim which gives the on-screen image an almost frameless effect. The profile of this display is very thin when viewed from the side which adds to its slim and trim stature. This overall sleek and slim profile design is sure to please anyone who wants their TV to call the least amount of attention to itself “size wise” as it adorns their living area.

The feet on this display can be adjusted to fit at the outer edges of the TV’s panel or be positioned near the center of the TV’s panel. These placement choices are all about consumer preference. The TV can also be wall mounted.

The display panel contains two down-firing full range speakers placed at the bottom and on the backside of the set. I will talk more about their performance later. The TV screen has a matte finish that in my opinion can sometimes give the on-screen image a dull appearance. Personally, I prefer a glossy screen finish which I believe gives the image better transparency and clarity. With that said, this TV’s matte finish didn’t appear to affect its picture quality.

The XBR800B features an edge-lit LED backlight design that Sony calls Frame Dimming. Video processing on this TV is handled by Sony’s 4K X-Reality Pro. This processing refines color, clarity and detail for better picture quality while portraying these images with a very natural appearance. The X-Reality Pro is one of the best processing engines currently available and does an excellent job at improving overall picture quality. This processing also upscales all non-native 4K content to near 4K quality, which will enhance the picture quality of your 1080p sources including your Blu-ray disc collection for a much better viewing experience.

Even though the XBR800B is part of Sony’s XBR Series, this set does not contain two-key picture enhancing features: TRILUMINOS Display technology for better color reproduction, and X-tended Dynamic Range technology for better contrast for increased peak brightness and deeper black levels. These features are reserved for the top models in this series.

3D capability is also absent on this set for those who may still be interested in this technology. 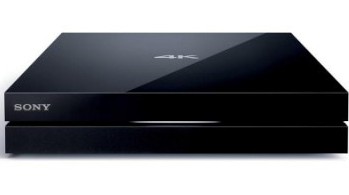 However, the XBR800B does contain Sony’s SEC smart TV platform. This platform presents an abundance of smart TV options including viewing your favorite apps such as Netflix and Amazon Instant which are capable of streaming 4K content directly to this display. In addition, you can also purchase or rent 4K movies and TV episodes from Sony’s Video Unlimited service. To access this service you will need Sony’s FMP-X10 Media Player which is sold separately.

You also get Sony’s Social View. With this feature, you can watch TV, follow tweets and Skype all at the same time. In addition, you can enjoy sports, TV shows or movies with your friends and family while in different locations. To use the Skype function you will need to attach a camera to the TV, which is sold separately.

Another cool smart feature on this display is PlayStation Now. Video gamers can now stream select PlayStation 3 games directly to their Sony TV with no console required. All you will need is a Dual Shock controller(s) which must be paired directly to your television.

The remote control supplied with this TV is your typical wand style design with a simple and easy to use button layout. The remote is not backlit.

Network functions include standard Wi-Fi for connecting to your homes wireless network. You also get Wi-Fi direct which bypasses your home’s network and allows devices such as your smartphone or tablet to establish a wireless connection directly to your TV. This set also features a full web browser for surfing the Internet. 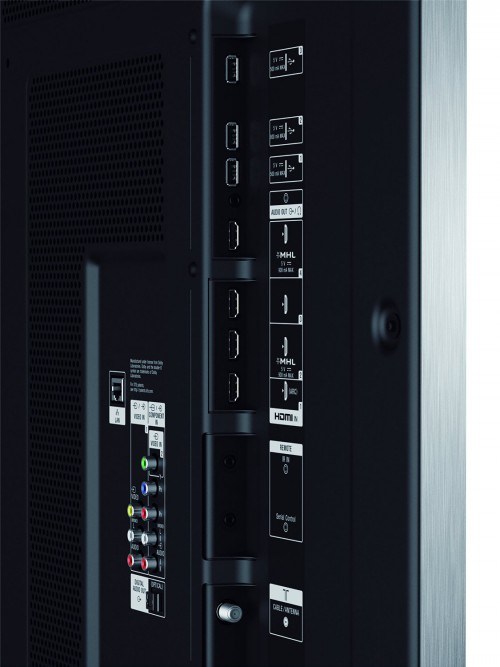 Even though the XBR65X800B is a lower-end XBR model and is minus the two-key picture enhancing features mentioned above, it still delivered very good picture quality. One of its strong points is color rendition. The colors produced on this display were rendered with very good tonal balance and accuracy. Colors were also very vibrant and showed no excess saturation effects. I also appreciated the natural look of the color palette produced on this display.

The black level performance was nicely rendered on this display. Blacks were very dark and appeared to be adequately saturated with good shadow detail. However, they weren’t the deep dark inky blacks I have grown accustomed to seeing on Sony’s XBR950B and XBR900B.

In general, the XBR800B delivered a sharp, detailed and very three-dimensional picture with plenty of clarity and image depth. This allowed the 4K content I viewed on this display to really shine. Also, 1080p Blu-ray disc content that was upscaled to near 4K quality by this television looked absolutely amazing. I was impressed.

The XBR800B’s MotionFlow XR240 technology did a nice job combating motion blur. I did not detect any motion blur artifacts on any of the fast action content I viewed, whether this feature was on or off. I left it turned off.

During my side angle viewing assessment on this display, I encountered a fair amount of screen dimming; especially when compared directly with the 950B and 900B. So I would suggest you keep side angle viewing to a minimum on this set.

The sound quality of the onboard speakers on this TV, was to no surprise, very inadequate. I experienced your typical lean and thin sound which was lacking in bass response. This is an all too common occurrence in most flat-panel TVs. With that said, my usual recommendation is to add a soundbar for better audio performance.

To assess the upscaling capability of the XBR800B, I viewed several scenes from the Blu-ray edition of Pitch Perfect. The 1080p native resolution of this disc upconverted to 4K quality on this TV was absolutely stunning. Images were filled with huge amounts of detail and clarity. Image depth was deep and very transparent, giving on-screen images an engaging three-dimensional appearance.

An extreme close-up shot of one of the female characters in the film revealed extreme amounts of fine detail and facial texture, which gave this image a stunningly natural  -“you-are-there” appearance.

The following statement is one I’ve made before and will once again: Sony’s 4K upscaling provides some of the best if not the best upscaling of 1080p sources in the industry. And this trend continues on the 800B, which delivered some of the best-upscaled images I’ve seen to date.

So even if you don’t plan on viewing much true 4K content on this display at this time, you can still enjoy the benefits of this Ultra HD TV with your standard DVD and 1080p Blu-ray disc collection.

Well, the most notable difference was in contrast reproduction… I noticed that peak brightness levels on the 900B and especially the 950B, were much brighter than the 800B; this made on-screen images appear much brighter, and in return rendered peak whites with so much more brilliance and pop. In other words, the whites were super white when compared to the 800B. This illumination difference made bright whites and the overall image quality on the 800B looks a bit dull by comparison.

Note: I accomplished the above evaluation by using images of white text against a solid black background.

I also noticed, but to a lesser degree, differences in black level performance. The 900B and 950B are known for their ability to deliver the deep/dark inky blacks I prefer to see on an LED display. The 800B was not able to produce blacks at these levels; however, these differences were not night and day, and the 800B’s black levels still appeared to be very good by comparison.

The area of performance where I experienced the least amount of picture quality differences among these sets was in color reproduction.

Here, the color gamut on these displays appeared to be very close. I had to look much harder to see any apparent differences. This area of performance was best rendered on the 950B. Colors on this display were more refined and a bit more full-bodied and vibrant. The 900B’s color performance fell just a bit short of what its slightly better-performing counterpart was able to produce.

Color reproduction on the 800B was not far behind the 900B and 950B and delivered a very similar visual presentation. To sum this up, the 800B did produce very accurate and natural looking colors which I thought were impressive; however, the other two display’s color presentation was still superior.

I wasn’t completely surprised by the results of this comparison test. I believe in order for Sony to have delivered a premium 4K UHD television to market at the 800B’s price point, some performance enhancing features had to be cut. This becomes very apparent when these sets are viewed side-by-side.

Even though the XBR65X800B falls a bit short on delivering performance at the same levels as its more expense XBR Series counterparts; on its own, however, it does manage to deliver very impressive picture quality. You also get a nice assortment of features all wrapped up in an attractive slim profile design.

2015 is poised to be a very good year for 4K Ultra HD TVs as more displays become available and at much lower prices. So if you’re thinking of joining the 4K revolution this year, why not start by having a look at Sony’s XBR65X800B.