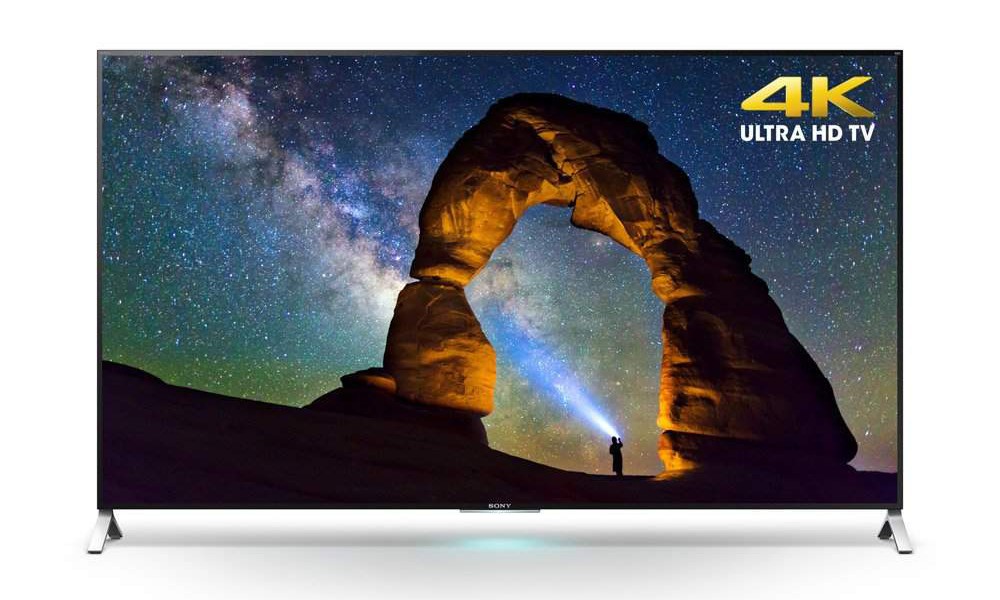 Sony’s XBR900C certainly makes a statement with its form factor showcasing its stunning appearance. But what about performance? Can this set provide a picture image that is equally stunning as its design? Or is it just another attractive looking display in the ever-expanding 4K UHD landscape. Well, let’s have a look and find out.

The XBR900C embodies the company’s slimmest panel design ever, and its visual impact is that of finely sculpted artwork rather than a video display device. The most notable design element on this set is its remarkably thin panel which is just under .02″ thick – or should I say thin – at its slimmest point. The bottom section of the panel’s depth does increase to approximately 1-5/8″ in order to house the TV’s electronic components and its four ( 2 main, 2 woofers) down firing speakers.

The bezel on this display, or lack-there-of, is so thin that Sony calls it their Vanishing Edge screen – which Sony claims “fills the screen to the very edge, so all you see is a picture that seemingly floats before your eyes”.

For wall mounting, Sony provides a special wall-mount bracket that allows the TV to be flush mounted to the wall. Nice work Sony!

If you plan to place this TV on a cabinet, the two arch-shaped feet are adjustable and can be placed either at the “edge” or “middle” position of the display. The edge position will provide the most stability in my opinion.

The picture screen on this set is the clear coat glossy type and is illuminated with Sony’s Dynamic Edge-Lit LED backlighting. 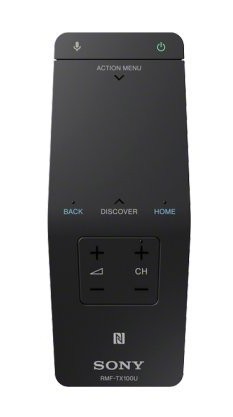 Two remote controls are provided with this set – a touchpad device that operates via Bluetooth and features a built-in microphone for voice control of select Android TV functions. The touchpad remote has a One-flick feature which gives you faster access to what you want to watch. This feature opens a shortcut menu to your favorite TV channels and online videos from Netflix, YouTube, Amazon Instant Video and more, all without disrupting what you’re already watching.

The other remote is a standard IR type with a typical button layout and functionality.

Wi-Fi – The latest 802.11ac Wi-Fi standard is built-in to this set for a faster Wi-Fi experience when connected to your homes wireless network. Wi-Fi Direct is also available.

TRILUMINOS technology – All the colors you dream of can now be seen on your Sony TV with TRILUMINOS Display. Colors come alive on the screen in the widest color range ever, and dynamic color correction ensures colors are as consistent and accurate as possible.

A Smarter TV –  So much more than just a Smart TV, Android TV delivers great content, streaming apps and Android games to your TV. Voice search and personalized recommendations make for effortless entertainment.

Google Cast –  With Google Cast built-in you can cast your favorite entertainment like HBO GO, Showtime Anytime, MLB.tv and more from your personal device to the big screen. You can cast from your Android phone or tablet, iPhone, iPad, Mac or Windows laptop or Chromebook. 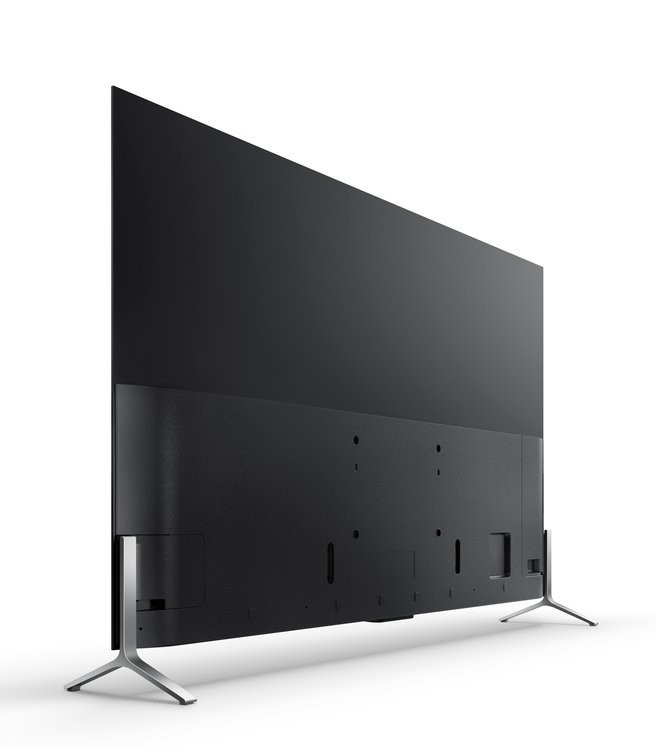 The XBR900C Series is Sony’s premium Ultra-thin class of 4K UHD displays, and a first glance will capture your attention with its very striking and eye-catching appearance.

Now, it’s time to discover if its good looks will match the most important aspect (in my opinion) of any television… its performance.

The 4K resolution of outdoor daytime scenes I viewed was absolutely breathtaking. For example, I was able to see the finely textured and intricate detail of objects and in close-up shots of a man’s face while out sailing in his boat. These same images also provided an extreme amount of image depth which allowed me to clearly see the landscape along the shore within the background of these scenes.

I also appreciated the three-dimensional appearance this display gave to on-screen images.

Another strong point of the XBR900C was its color rendering capability. And with the help of Sony’s TRILUMINOS technology, this set produced a wide and very dynamic color range which displayed a color palette that was very accurate, as well as portraying a life-like visual presentation.

Viewing this display at wide angles wasn’t bad at all, and actually appeared to perform a bit above average for an LED design, with the end results providing minimal picture dimming and color saturation loss.

Sony’s Motionflow XR 960 assists with motion blur reduction; however for this review, I turned this feature off. I then viewed fast motion content of a flock of birds gliding quickly through the air, and I didn’t detect any motion artifacts.

The XBR65X900C did have some flaws in its performance that concerned me:

Its contrast and black levels were not what I’ve come to expect from one of Sony’s premium XBR models. When viewing dark scenes on this set, black levels appeared somewhat grey and a bit washed out. This became even more apparent while viewing white text overlaid a completely black background. This image also accentuated the limited contrast range this set was producing.

I must say I was very disappointed with the lack of performance in these crucial areas. One possible reason for this outcome may be due to the type of panel used for this TV, which is said to be an IPS design. I came across this info in a popular forum; however, I wasn’t able to confirm this info at the time of writing this review. Once I’m able to confirm this, I will update this review.

If this set does use an IPS panel, that could explain its less than stellar contrast and black level capabilities, since IPS panels are known for their inability to produce deep black levels.

I ‘d also like to bring to your attention the *reported issues from owners of the XBR65X900C that are having panel light bleed problems. I personally experienced this problem with the first unit I used for this review. What I encountered was severe light bleed coming from the bottom left and right corners of the displays’ screen. It was also visible, but to a lesser degree, from the bottom-center and on either side of the TV’s screen.

This caused the dark images I viewed to look grey and severely washed out, and with no appreciable contrast. I could even notice these deficiencies on certain brightly lit scenes but to a lesser degree.

To my knowledge, Sony is aware of this light bleed issue.

For the record, the second TV, which is the one I used for this review, had no light bleed issues. This seems to correspond with what consumers are saying about this TV – that many individuals are having light bleed issues, while some are not.

Sony’s XBR65X900C is a beautifully designed display. It is loaded with features and has some very good performance attributes such as its outstanding 4K detail and resolution clarity, its exceptional color rendering capabilities, and excellent 4K upconversion of standard HD content.

It does, however, have some issues that just cannot be overlooked, namely its inability to produce strong contrast and deep black levels, which could be the result of this TV’s possible use of an IPS panel.

Furthermore, with all the reports of light bleed issues regarding this display, you may want to consider another option such as Sony’s excellent XBR930C Series.

However, if you do decide to purchase this TV, be aware of the retailers return policies just in case you have to make a return or an exchange. 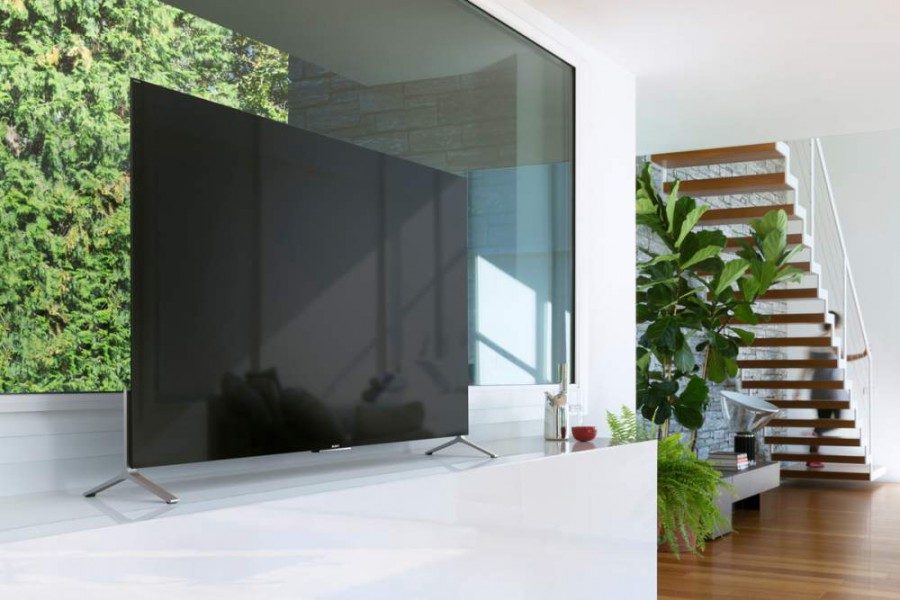