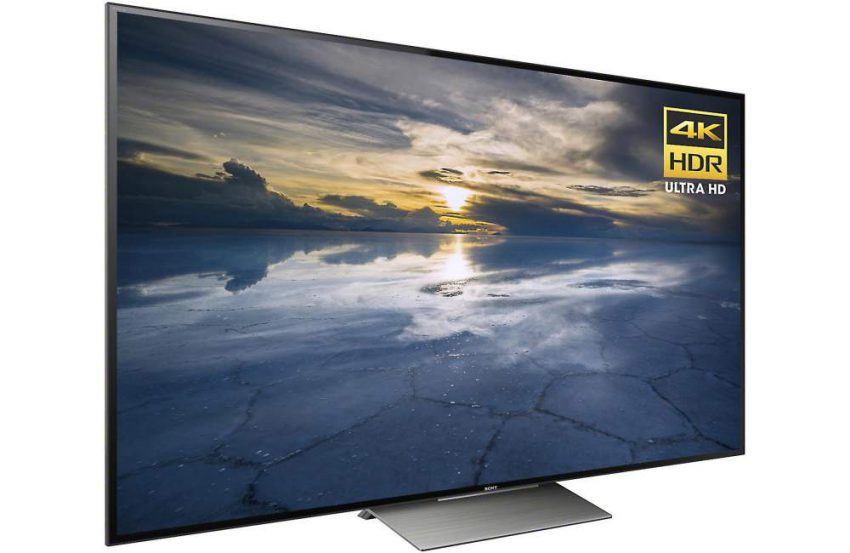 Sony’s latest lineup of premium XBR displays is heavily focused on HDR (High Dynamic Range) technology for its substantial increase in picture quality when compared to standard dynamic range TVs. HDR brings a whole new visual experience to television viewing in the comfort of your own home in the form of increased contrast with a greater range of peak brightness (highlights) and black levels, in addition to a wider color gamut for a rich and vibrant color spectrum, as well as better picture detail.

In this review, I take a look at Sony’s new 65″ 930D. And during the review process, I was able to evaluate its HDR picture quality, and I must say that I was very impressed with what I saw. I will cover this in detail in the performance section below. In the meantime, let’s have a look at the design and features of this exciting new 4K HDR TV.

The 930D is a strikingly handsome television, and in my opinion, its most notable visual design attribute is its ultra-thin display panel which is less than a 1/2″ deep at its thinnest point. The bezel surrounding the screen is also very thin measuring just under a 1/2″. The sides and top of the panel are fashioned with a golden accent which gives it a more elegant form factor.

The TV screen is made of acrylic (plastic) and contains a glossy finish. I prefer a glossy finish which adds transparency and more clarity to on-screen images, especially when compared to a screen with a matte finish, which in my opinion can often make images appear dull and a bit flat.

Next, Sony has introduced a new stand concept for its 2016 XBR models that Sony calls a Silver Slate design. Even though this stand is made of plastic, it’s still aesthetically appealing and compliments the display panel. The stand also incorporates a built-in recessed cable routing system to conceal all cables behind a rear cover.

The display panel, when mounted to the stand, was a bit wobbly when I gently rocked it back and forth from the top of the panel, yet it still provided good stability and was not at risk of toppling over.

New to the 930D is Sony’s Slim Backlight Drive technology. This edge-lit LED backlight illumination design with local dimming capability uses a precision grid array system to deliver light where it is needed most on the screen; resulting in exceptional picture quality with better contrast, color, & detail. It is also supposed to help increase the quality of HDR images.

Upscaling of non-native 4K content via the X- Reality Pro continues its tradition of excellence on this display and is the best I have currently experienced in the industry.

TRILUMINOS display technology creates incredibly true, natural shades of colors that are rich and vibrant and brings you closer than ever to real-world colors. 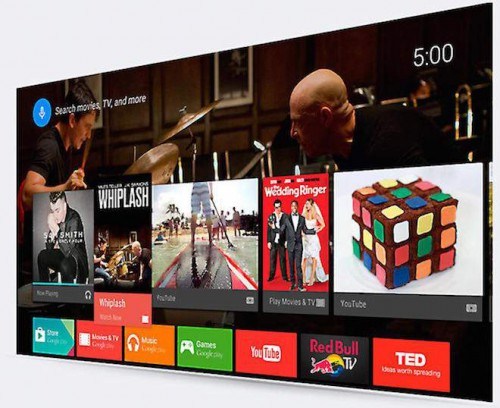 The Google Android smart TV platform gives you access to a wide variety of apps from Google Play, which is selected from columns of tiles spread across the screen. The interface is fairly easy to use making it easy to find and stream your favorite video content. The latest version of this OS is faster and provides better stability than the previous version.

One upgrade worth mentioning regarding the smart TV’s OS is its Voice Search feature that is accessed via the remote’s built-in microphone which now makes it easy to search for a particular movie or actor just by saying the name.

And speaking of remotes, Sony has ditched the two remote combos on the 930D and is now minus the touchpad version supplied with last year’s 930C. Now you get just a basic IR remote that contains the built-in mic. The remote also has a new dedicated Google Play button that is adjacent to the Netflix button. The remote is not backlit. 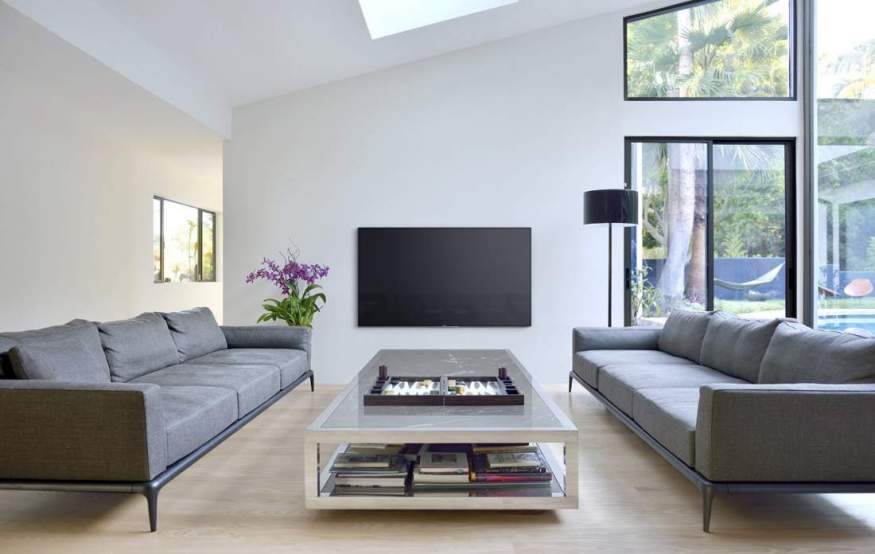 The big attraction of the XBR930D is not just its slim profile design, but also its HDR capability… and my initial impressions live up to all the hype. And as I noted earlier, key improvements in picture quality are better brightness highlights and much richer and more vibrant colors. During my evaluation I was clearly able to see these visual improvements in the 4K HDR content I viewed on the 930D.

During night time scenes I was amazed at how much more of the image I could clearly see… the increased brightness levels lit up the entire city landscape which allowed me to clearly see all of the activity that was taking place in addition to revealing substantially more detail within the image. It was though a veil had been removed from in front of the screen. Overall, the image appeared more illuminated without looking overly bright or washed out.

Furthermore, dark scene illumination was vastly improved allowing more color information and detail within the image to be seen. For example, when viewing a shot of a large art sculpture, the brighter picture highlights revealed increased visible detail and color info that was much more evident when compared to the same image shown in SDR (standard dynamic range).

The other huge difference I noticed in picture quality was the wider color gamut. Colors were extremely vivid and vibrant which made them pop from the screen and brought me closer to what colors in the real world are supposed to look like.

HDR also increases the color saturation and vibrancy, as well as fine detail when viewing 4K images that take place in brightly lit environments. For example, in a scene, I viewed that contained a variety of vegetables spread out across a table revealed, extreme amounts of detail and clarity, in addition to a color palette that was absolutely breathtaking.

Increased range of contrast was also very evident with HDR content on this display. For example, a nighttime image of a volcanic eruption portrayed the red hot fiery glow of the lava flow in a brilliant shade of red with excellent dynamic highlights while the surrounding blackness of night remained completely intact delivering deep and very dark blacks.

Up to this point, I have only talked about the 930D’s HDR performance, however, I don’t what to lose sight of its traditional 4K performance, which as expected was excellent. Colors were rendered naturally with great dynamic realism and punch.

Black levels provided satisfyingly deep blacks with good shadow detail of which I have grown accustomed to seeing in Sony’s best performing XBR models. However, I can’t say for sure without doing a side-by-side comparison (which I was not able to do) of last year’s 930C to see if black levels in the 930D are better or worse. But going on memory alone, they do seem to be on par with one another.

Side angle viewing on the 930D was good for an LED TV. When viewed at a 45-degree angle, there was minor color saturation and contrast loss to a point I felt it wouldn’t be a problem for viewers sitting at this particular angle. After moving out to extreme angles, the effects on viewing was impacted more but was still not to the point of being too distracting.

Screen uniformity when viewing a black screen with overlaying white text in the center of the screen didn’t produce any haloing that I could detect. Furthermore, I didn’t see any light bleed along any of the edges or corners of the screen on my review unit. However, I must note that there have been reports on AVS Forums from owners of the 930D with light bleed issues in the corners of the TV screen.

I’m not surprised at these reports since many of today’s TV manufacturers are striving to achieve the thinnest panel designs without compromising picture quality and performance. But as many of you already know, this process can be a challenge for manufacturers, to whom many are running into quality control and performance issues in terms of screen uniformity problems such as light bleed, clouding and flashlighting from the TVs LEDs.

Unlike the 930C, the sound from the 930D’s down firing speakers was a bit disappointing, delivering lackluster audio quality which really comes as no surprise from a thin flat panel display. The audio quality in the high and midrange frequencies was the usual thin an anemic type sound with no real bass output. The TV’s speakers also don’t play very loud.

Sony’s XBR65X930D delivers big on performance and features. Its traditional 4K image quality was very good. However, I must say that its 4K HDR chops stole the show with an overall impressive picture presentation. HDR technology looks very promising and certainly is the real deal with its dynamic contrast capability which extends peak brightness and highlights to never before seen levels, and the 930D proves this point.

What HDR does for 4K images in terms of a big leap in performance, is what high definition TV (HDTV) did for the standard definition market when it was introduced many years ago.

As more HDR content becomes available through streaming services such as Netflix and Amazon Instant as well as Ultra HD Blu-ray disc; these options will give consumers the opportunity to enjoy a much better viewing experience in their homes, and there is no doubt that consumers will see and appreciate the increase in picture quality over non HDR content.

So if you’re in the market for a 4K TV with HDR capability, I suggest you check out the XBR65X930D. Its overall image quality is very pleasing and a pleasure to watch. And even if you don’t plan on viewing 4K or 4K HDR content at this time, you’ll already own a display that is ready for the future of television once you feel inclined to make the switch.

*Update: Firmware update version PKG3.531.0108NAB has improved input lag which was originally around 53.0 ms, is now down to approximately 36.0 ms in game mode, which is decent for gaming.

Check out the video presentation below for the XBR930D…